The Gig Log - Lokalgrown: The Gateway for KSL Studio 5

Most of you are probably in school or at work at 11 AM, but there is a great tv show on Salt Lake City's KSL (channel 5) called Studio 5. You can check it out here. Lokalgrown wrote their theme song, which airs daily. You can check that out here.

On Tuesday, September 6th, Lokalgrown played at their Season Premier live show which was held at the Gateway in downtown SLC. We did some pre-show tunes, played a little bit live, and then played a short concert on the Plaza afterwards. The rain notwithstanding, it was AWESOME.

As always, you'll get some different views of the kit, the stage, and then an extra surprise today.... 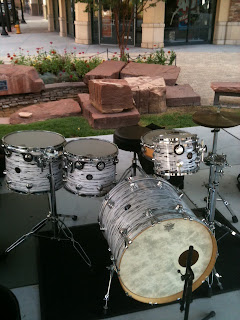 I always try to take a shot of the kit before it gets cymbals and microphones so that I remember which drums I used and in what configuration. This specific setup is starting to be a favorite. 10" tom up top, and the 14 and 16 off to my right. 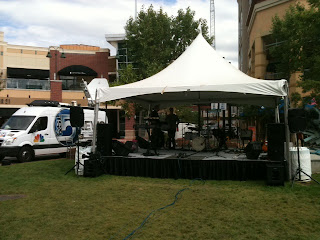 The next shot is from the audience. It's a little bit of cool to have the KSL van off to the side behind the stage. At first we were talking about taking the tent down because it was really hard to see the people (us) under it, but when the rain came down we were grateful for the cover! 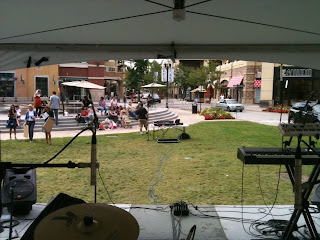 This was my view. There were a few more people out - and some dancers - when the show started. It was also cool to have people who work and shop the Gateway just stop and listen for a while. 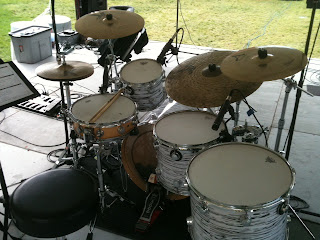 The kit all wired up. Thanks to Trevor, the sound guru, who made us sound great both live an on TV. 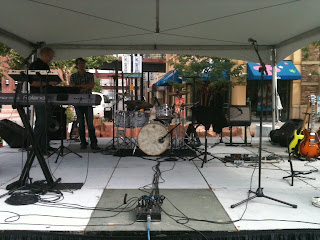 And the view from the front of the stage. It's still not terribly clear, but this is what it looked like.

Now for the surprise. Check out the live TV footage from the gig.