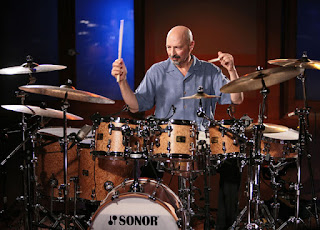 Steve Smith is AWESOME. I've seen him play live a number of times, enjoyed his recordings and DVDs, and been inspired by his playing for years. And, yes, I've stolen quite a few of his ideas, grooves and licks. You should, too!


But I didn't truly have an appreciation for who Steve Smith is until I came across his "Drumset Technique and History of the US Beat" DVD set a few years ago. I highly recommend it.

His take on technique and practicing is one with which I thoroughly agree. And his setup is the most similar to mine of any top-level drummer I've seen.

One of Steve's ideas that really rings true with me has to do with the idea of not forcing a new concept or idea into your playing. He says that you should practice an idea very slowly at first (sound familiar?), and repeat it every day over as long a period of time as it takes for the idea to, "naturally enter your playing."

I've tried this approach, and it's rewarding. It took me a long time (several weeks), but one particularly difficult (but super cool!) lick I'd been working on surprised me at a gig by just flowing out of me during a fill. I'd never used the idea in a live situation before, and didn't try to! It just happened because I'd finally convinced my brain that it was a natural part of who I am as a player.

Oh, and he also rocks. (Ever hear of Journey?)


* Do you have an artist, band, song, album, video, website or other resource you'd like to share with the "To Drums" community? Send me an email or list it in the comments below and we'll get it up. I'm pretty open to anything, so let me have it!
By keithpercussion - December 30, 2011