Friday Feature: Standing in the Shadows of Motown 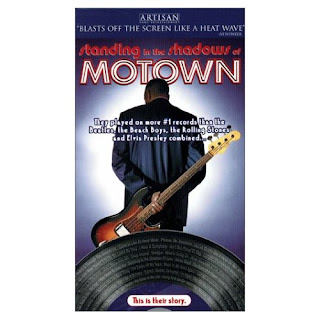 If I hadn't already made this clear in an earlier post, I'm a huge fan of documentaries, especially music documentaries.

One of my favorites is, "Standing in the Shadows of Motown," telling the story of the session musicians who brought the classic Motown sound to life, the Funk Brothers.

"The film is an extremely moving account made exponentially more so by the deeply felt faithful renditions of some classic hits performed by contemporary young artists during the film. Never was the term 'unsung' more appropriate than it is for the Funk Brothers."


When I saw this film, it was newly (although not widely) released, but was mostly playing in art houses and the like. And, honestly, I had no idea what I was walking into, having gone with a friend. But in the two hours it took to watch the film, I had my eyes opened and my ears attuned to something I had been missing.

I think everybody's heard of Motown - Marvin Gaye, The Four Tops, Gladys Knight and the Pips, Stevie Wonder and many more - but until you see this film you won't have a real understanding of what it took to create that sound, genre and era of modern popular music.

This film is worth your time. I've purchased it and given it away many times, I own the soundtrack, and I've made a whole lotta people sit down and watch it. Even if it's not your style, or you don't like any of the artists, enjoy it for the history lesson and education that it is.