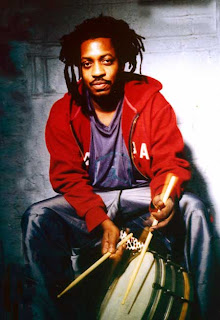 Another favorite drummer who is much, much more than that. Steve Jordan is an artist. He is a producer, musical director, composer, drummer....you get the picture. For a fairly complete look at his career and musical works, visit the Drummerworld site.

One of the things I admire most about Steve is that he's multi-faceted, and approaches music from a variety of angles. He never thinks about music - or performs, writes, etc. - from only one aspect. He seems to always consider what his contribution will do in terms of affecting the whole. He's thoughtful about his choice of sounds, grooves, fills and overall style to make sure that the music achieves the desired affect.

In short, he's a musician. He listens. Communicates with his band mates. Plays well with others. Again, you get the idea.

Two of my favorite Steve Jordan moments are his appearance in the documentary film, "Standing in the Shadows of Motown," and his work with John Mayer and Pino Palladino. I just can't get over the "Try" album. It's one that I can listen to for many reasons and for many hours.

And as I've said about some other players, you won't do any harm to yourself by learning some of his techniques and tricks.