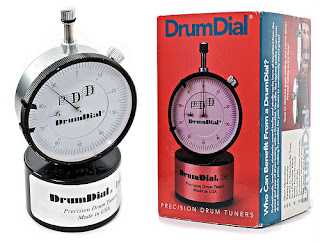 I'm having a serious conundrum. To Drum Dial or not to Drum Dial?

The Drum Dial is a relatively simple tool (similar to a durometer) that measures the tension of a drumhead. You use it by placing it on the drumhead next to each tension rod, relatively close to the hoop.

In theory, when you get the tension exactly the same around the entire head, it's in tune. Of course, you have to take into account the type of drum, its depth, the type of heads, and the relationship of the heads to each other (resonant to batter).

Drum tuning purists (yep, there really are such people - including me, to a degree) argue that tools like the Drum Dial are "cheating," for lack of a better term. They say that you should be able to tune your drums yourself, by ear. And if you can't, well, then you don't deserve to sound good. And I know plenty of skilled drummers who have never learned to tune their own drums. They play great, but sound awful.

About six months ago I put all new batter heads on my DW drum kit. As an experiment, I used the Drum Dial on all of the heads, both sides. Also, I used the recommended tensions from the Drum Dial web site.  I was pretty happy with the results in my studio, but I needed to get out on a gig with them, so I took them to the very next show I had.

I got an interesting reaction from the bass player on the gig (Ryan Tilby). While we were sound checking, he turned to me and said, "Wow. That sounds exactly like a backline kit."**

Truth be told, the heads required quite a bit of fine tuning after using the Drum Dial. Just having the dial read the same number at each lug wasn't enough to get the head to sound "clear" (without waves or beats) and open. That part had to be done by ear. But the dial did drastically speed up the process of getting the drumheads to the fine tuning phase.

To me, I think that's the answer. The tools we have are still only tools, so the actual work of getting your drums to sound the way you want them to is still up to you. It's like fixing cars. Sure, we have power tools, hydraulic equipment and sophisticated computers, but the work is still in the hands of the mechanic.

The Drum Dial, and tools like it, are just a part of your arsenal to achieve great sounding drums.

That being said, I'd love to have a spreadsheet of every drummer in the world that showed which drum they're using, what heads, and at what tension. Then I could sound like anybody I want. Does that seem like giving up too many trade secrets?

What do you think?

*If you don't know who Peter Erskine is or aren't familiar with his work, click his name above. He has been a huge, positive influence on many a drummer, including me.


**A backline kit refers to a rented drum set that is tuned in a very standard, generic way. The drums will sound good, but usually not distinctive. It is left up to the drummer or tech to individualize the sounds to the specific style or venue.
By keithpercussion - January 02, 2012