Couldn't resist the title of this one. Too many acronyms came immediately to mind to be dismissed. Translated into English, the title should read, "Lokalgrown at Hale Centre Theatre for New Year's Eve."

Such a fun gig. We've played the HCT New Year's party - as the pre-show for the opening of the new season's comedy - for most of the last eight years or so. The HCT crowd is always energetic, loud and kind. Truly it's one of the gigs we look forward to every year. It never gets old. 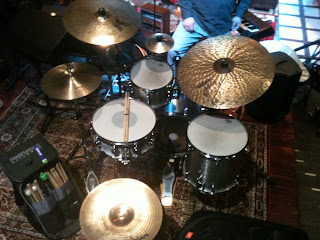 Here's the kit almost fully set. The remaining crash is on my seat. Notice the Pro-Mark cymbal rattler. I don't use it very often, but it seemed like a good idea. Turned out to be a great sound for the room.

I'm also a HUGE fan of the rug! Didn't think it would make things look so classy, but it totally did. The only problem is that the pedals and kick drum "walked" all night long. On a regular drum rug things don't move around that much. I had to keep pulling the kick back toward me. 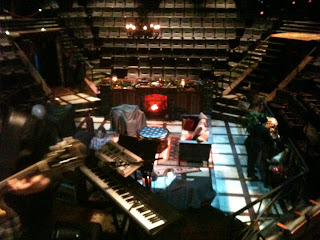 The Hale has a very unique set up. It's theatre-in-the-round, so the audience is seated all the way around the main stage. There are three sort of mini-stages situated at the top of the seating around the theatre, and we set up on one of these. Here's the view from where I sat.

Quinn's keyboard is right in front of me, then the stage. Pretty cool place to play from. 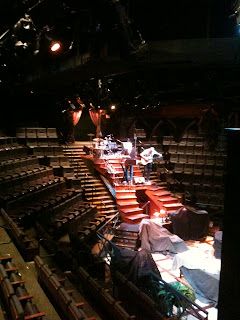 (Right) Here's the view from a part of the audience.

(Below) The other shot may seem random, but let me 'splain.

At the end of this gig we had exactly seven minutes to get all of our equipment - instruments, sound system, etc. - out of the performance area and into the hallway. Then we had to pack everything up and move it out in almost total silence. Not so easy, friends. Not so easy. So, I took a picture of my entire rig after we had packed up.

My whole load in/out is two bags of drums (kick/snare in one, toms in the other), cymbal bag, hardware bag, bag of tricks (shakers, tambourines, etc.) and my rug, which I didn't use on this gig. 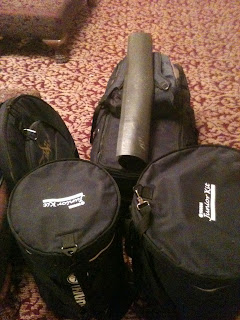 This is the number one reason I use the Yamaha Manu Katche (Junior Kit): it packs up and loads out with not a lot of effort. I drive a relatively small station wagon, and the bass player (Matt Redd) and I were able to carpool to this gig with both of our equipment in the back with room to spare.

Anyway, it was another very fun, successful Lokalgrown gig. Thanks for taking a look!

Happy drumming in the new year! 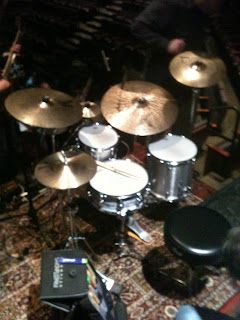 One funny story from the gig that night.


We usually do a little audience interaction in the form of a "Name That Tune" game. We use TV theme shows (The Office, Andy Griffith Show, Friends, Glee, Cheers, etc.)


For this gig we decided to use all songs from musicals. It was hysterical! For the first time we actually stumped all three competitors with one song.


It was, "Do You Hear the People Sing?" from Les Miserables.


What makes it funny is that we had expected the audience to "get it" quickly and sing along. Instead, we got crickets.