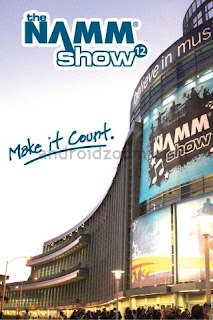 It's January, and you know what that means - it's NAMM Show time!

So, what the heck is the NAMM Show? Do you hear people talking about it, read about it on music websites, or know people who have gone?

First, you need to know what NAMM is. From Wikipedia, "The acronym NAMM originally stood for the National Association of Music Merchants, but has evolved from a national entity representing the interests of music products retailers to an international association including commercial, reseller members, affiliates and manufacturers."

For a few years, while going to college, I worked at a great music store. The owner took all of his top people to the NAMM Show every year. I had no idea what to expect until I got my turn to go in 2004 and 2005, and it completely changed how I view the business side of the music world.

Simply put, the NAMM Show is an event that allows companies that manufacture and sell music gear and other products (wholesalers) to showcase their offerings to resellers or other companies that offer these products to the public (retailers). Why would they need to do that, you ask? Let me give you an example.

The last time I was at the show, there were over 300 different brands (wow!) of drums. As the drum purchaser (or buyer) for the company, I had to decide on which two or three brands we would carry in our store, and, as you can imagine, every one of those companies tried to convince me that their product was the best and easiest to sell.

So how does a retailer decide what to offer their customers? Well, a lot of factors go into this sort of choice. Among other things, they might consider:


How do the wholesalers convince retailers to buy? It's a very detailed, well thought out and - usually - expensive process.

The basic tactic is to display products in a booth setting, sort of like shops in a mall, but much smaller and much more compact. There are thousands of booths, and hundreds of thousands of individual products. And each seller goes to great lengths to make their booth seem hip, cool, trendy, flashy or classy, and to demonstrate why their product is so great.

Another tactic is product demonstrations by somebody famous. For example, you might see (like I did) Will Calhoun at the Sonor Drums booth showing off the new line of snare drums, or Russ Miller giving a lesson example at Yamaha Drums.

In addition, many companies will host concerts, parties, jams and contests to woo buyers. One such concert I attended was Yamaha's Groove Night 2004. It was an unbelievable show, and I walked out thinking, "Man, I can't believe how many of my favorite players use Yamaha." Score one for the marketing team, because that year we bought over $40,000 in Yamaha products for our store.

Oh, and another thing? It's called "swag," and I came home with a ton of it both times I went. Swag is free stuff covered with logos of brands and products, and sellers pass it out by the truckload, especially to important buyers. Some common swag items are shirts, hats, stickers, drum keys, heads, lanyards, and in some cases, jackets and real product samples like microphones and cymbals. It's awesome!

Finally, this post would be incomplete with mentioning maybe the best thing about the show - the people you get to meet. Not only your favorite musical celebrities, amazing players and other famous types, but the people who know the most about gear and how to get the best out of it.

In 2005, we made a point of finding the best sounding drums at the show and asking the highest ranking person we could find to tell us how they got such great sound. In addition to discussions about shell materials, hoops, heads and sticks, we got a ton of advice about how to tune heads and treat drums to get world class tone and sound. Again, awesome!

In short, the NAMM Show is the place to see what's new - and everything else - in the music products world. If you ever get the chance to go, don't pass it up.