Beyond the Kit: Shooting Free Throws

My apologies to my private students, because you're getting another basketball metaphor. 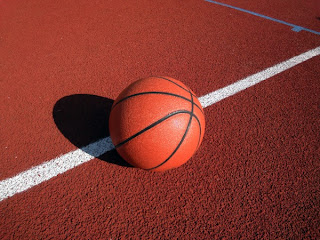 Here's the question: what makes us confident? Not only in music, but in life? While there are doubtless many things at play, I'd like to suggest one that works fantastically in drumming: The Free Throw Principle.


Imagine that you're a basketball player, and you're lousy at free throws. Problem is, you never make them in games, and you never practice them. As a result, every time you get fouled in a game, you instantly get nervous. You'd almost rather just hand the ball over to the other team because you know you ain't makin' no free throw. Your confidence in your free throws at this point is zero.

So let's say you finally decide to tackle the beast one day before a game. You decide you're going to shoot ten free throws. You miss the first nine, but - miraculously - the tenth one is perfect and swishes right through. Suddenly, you're a great free throw shooter, right? Uh......no*. At best, you're ten percent.

That night at the game, how's your confidence? Probably a little better, but not great yet. So you keep shooting. Let's say the next day you work on your form, and you hit five out of ten, and by the next week, you're hitting nine out of ten. The first day you hit nine of ten, you're pretty happy, but soon you want to hit that many every day, and you start thinking about ten of ten.

Take this to its logical conclusion, and let's say you're hitting somewhere between eight and ten of ten every day. Now you get fouled at the game, what's your confidence like? If you know you can hit 80% or better, you'll start to look forward to going to the free throw line. And if you miss one, you know that your chances of hitting the next one just went through the roof.

The point is, when you get to the gig, you shouldn't be trying to pull off crazy fills or take huge risks that you haven't practiced up to a respectable level at home. Back to the basketball analogy - even when you see somebody like Kobe Bryant or LeBron James take what looks like a circus shot in a game, remember that those boys have spent just as much time in a gym practicing every imaginable shot from every imaginable spot as you have practiced any lick, fill or groove on the ol' skins.

*Although we do this all the time, as musicians. We work on something until we get it right once, then, "Yay! Let's move on!" What are we thinking?!