Beyond the Kit: Be Immature! Okay, not really, but...

I had a bit of a revelation while teaching lessons tonight (also while listening to Coldplay, but that's a different story!).

Two experiences converged in my mind. 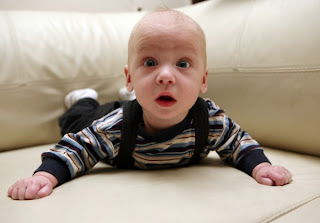 So, here's what I learned:

Little kids - babies, toddlers and young children - absolutely do not care if something is hard or easy. Those terms don't exist yet.They also don't care how many tries it takes to get something done. Honestly, (especially for you parents) when your kid wants something and is determined to get it, they will not quit until they are satisfied in one way or another.

Think about learning to walk. How many times does a child fall, stumble, bumble - they essentially fail - while learning to crawl and then walk? And some of those tumbles really hurt! Yet they continue to get up and try and keep working at it. Why? Because they have a goal, an end vision in mind.

Imagine if that little nine-monther thought to himself, "Y'know, I've tried to walk around now for the past six months, and....it ain't happenin'. I don't like walking anyway. I'm not good at it. So...I'm done. I'll just crawl. Crawling's good, right?"

Nope. Won't happen. Again, because little kids don't care if it's hard, and they don't care how long it takes. They care about walking or running, or throwing the ball or whatever it is. I see my younger child watching his big sis, and all he's thinking about as she's careening around the house is, "I'm going to do that. As soon as possible!"

But something happens to us as we grow up. We begin to get sensitive to what others think of us, and what is expected of us. Many of us develop an expectation that we will be good at everything we try or experience success right at first.

So when it takes some time and/or effort to develop a skill, we usually try one of two tactics. First, there's the, "I don't like it," line of defense. This is essentially an attempt to excuse ourselves from having to work at something because it's unpleasant. It's like saying, "Oh, I don't look good in orange." If I don't like it, then it's not good for me so I shouldn't do it.

The other tactic is, "I'm just not good at this." This one is a little more offensive to me because it carries a sense of finality. Kids wield this one like the hangman's noose. We try to use it in the sense that a 5'2" man would when asked why he doesn't play basketball. (Ever hear of Spud Webb?) It gives them an excuse to not even try. I hate that. I will allow my students to say, "I'm not good at that yet, but I will be."

I've been a father long enough to know that when my daughter tells me she doesn't like something, she really means, "I don't know how to do it, and that scares me." When she gains a little bit of ability and confidence, it magically becomes her favorite thing to do.

So it is with most of us, and especially musicians. We don't "like" things we aren't good at. Conversely, we tend to like the things we are good at. If you're not good at playing jazz, you won't like playing jazz. But as you gain some jazz chops, you'll suddenly find yourself looking for opportunities to play.

Well, you get the point. You wanna like basketball? Get good at it. You wanna enjoy talking about Shakespeare? Read it!

Alright, I'm done for today. Feel free to join the conversation below.