I've been hesitant to address this topic, but there's just too much good stuff going on right now on this topic to ignore.

Before I dive into it, I do want to make one thing crystal clear: in my mind there are no limiting factors to being a great drummer in terms of gender, race, ethnicity, orientation, political leanings or soda preference.

The biggest indicator? How hard, long and smart you work.


Okay, now that we've got that handled, on to the good stuff. 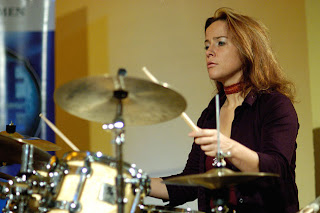 There's been a huge push in the music industry over the last decade or so to try to convince girls/women that playing music is for them, too. While it's true that the vast majority of high-profile drummers are male, there are some amazing female players out there, and it seems like there are more all the time.

As a starting point, check out Drummerworld's list dedicated to "The Ladies." Earlier this year on the blog, I featured one of my favorite women of groove, Emmanuelle Caplette. And today, I ran across this website, the "Hit Like A Girl" contest.

From my personal experience, I've played with and taught many a girl drummer who could outplay any boy in the neighborhood with ease.

One quick story about a former student of mine. As a Sophomore in high school (15 years old), she was playing the timpani part on Jager's "Espirit de Corps." If you've ever played that piece, you know how important that part is. The day before our district band festival, she got her wisdom teeth pulled out. On the day of the performance, she told her mom not to give her any pain medication because she wanted her head to be clear so that she could play her best.

Be honest. Would you have even showed up after you had your wisdom teeth out? I probably wouldn't have. And don't even think about going without paid pain meds.

That night her example put a new sense of toughness and self-respect into our band, and we qualified for the state-level festival for the first time in school history. This girl set a new standard for toughness and dedication to her craft. Percussion - and her self respect - were of critical import to her. Awesome!

Anyway, girls rock. Go play the drums, or anything else you want to. Just let us boys play along, too!