Gear Up: Android and iPhone Apps

I have to admit that I was fairly slow to get on the smart phone bandwagon, and even slower to get an iPhone. And even then, I was pretty slow to start downloading apps. It's not that I was super-resistant to forward progress, I just didn't see how they'd make my life - especially my musical life - much better.

But, as they say in the TV ads, life changes fast.

My first revelation happened when somebody (a bass player, no less) gave me a run-down of some apps he uses pretty frequently. I found and downloaded a free metronome and chromatic tuner. Awesome! I could now put the ol' headphones in and practice to the click. I could also get my guitar in tune via the iPhone. Magic!

Check out some cool apps for musicians.

From then to now I've used a variety of apps, both music-related and not. I've found a handful that are really fun, some that were a complete waste, and a rare few that have become indispensable. I now use my iPhone at every gig, at every rehearsal, and frequently during practice session. 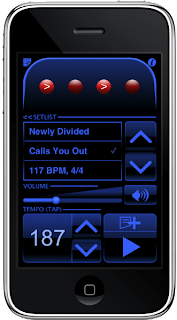 One application that I use most is Frozen Ape's "Tempo." At its core, it's simply a metronome application, but also features a reliable tap function, and programmable set lists. It's huge for a gigging drummer, because I can program in my band's set list (which is usually pretty rigid for entertainment/corporate gigs) and have a tempo in my ears for each tune - basically with one touch.

Now I know that there are some purists out there that shudder at the idea of having a click-track on stage with you during a live performance. Believe me, I've been there. It took a lot of talking from my bandmates and a couple of other drummers, but I was finally convinced to give it a try. And I've got to tell you, it has made certain things a lot easier. I'm still getting used to it, but it's nice to know that you have the tempo dialed in and you aren't going to have rushing and dragging problems.

While there are a million (actually a lot more, I'm sure) apps out there, I recommend that you try to limit what you keep on your phone to those that you'll actually use, and those that will help you achieve your goals.

As with all things, smart phones can distract you and dilute your efforts. Stay focused, and use tools that will help you get the job done efficiently and correctly.