The best-paying (non) gig I have ever had was a couple of summers ago. I had gotten a call from an old friend of mine, a violinist. She had a lead on a Bat Mitzvah party gig that was going to be both lucrative and enjoyable. I’d never played this type of event before, but I was up for it, especially since it was going to be a trio of violin, guitar and percussion.
Leading up to the gig we emphasized the need to be sensitive to the cultural traditions and the environment that the family wanted - volume levels and the choice of set list were discussed to no end. Also, the mother of the girl was a little bit nervous that her husband would not approve of the music and was afraid that it was going to be too loud, and we wanted to be the perfect choice, so we prepared very well.
We had rehearsals, include a couple that our “boss” came and listened in on. She seemed thrilled, and everything was going well. One week before the gig, all was in order. We had our repertoire chosen, we had every detail nailed down. It was in the bag.
But then....(Ominous music begins to play in the background.)
Two days before the gig, I got called by the same violinist friend. She informed me that I had been fired (What?! Seriously?!) because the husband/father had been to a club the night before and the drummer had played too loudly* for his liking. She was dead serious, and I was out of a gig without having played a note. 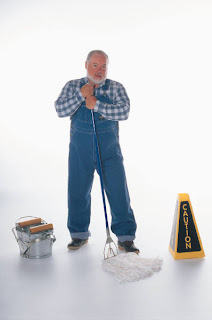 Believe it or not, this is where it turns into the gig of the century. My amazing friend told the mother that she needed to pay me even if they weren’t using me. Her argument was that we had already put in all the prep time and had essentially “sold” the day to her, and it was far too late for me to get another booking.
No kidding, I got a check in the mail the day of the gig, and while my bandmates were busy playing it up at the Bat Mitzvah celebration, I was vacuuming the floors. My wife was thrilled.
Truth be told, I’d always rather play than not play, but it was awfully nice to get paid to help the missus clean the house.
*There’s a lesson here for every would-be successful drummer. SHUT UP. Okay, maybe that’s putting it a little too harshly, but this is what drummers are known for: being too stinking loud. I challenge you to have the band you’re playing with asking you to play a little louder. You’ll do all of us a favor! Simply put: listen, listen, listen. Play as sensitively as you can.
By keithpercussion - April 04, 2012