The Weight Room: "Come off trying!"

When I was in college, I was a fairly serious rock climber. I had a small group of friends that I literally trusted with my life on a daily basis. (If you've never been climbing, rappelling or spelunking, it can be hard to understand this concept. But in order to participate, you must put your life and safety in the hands of your belay or partners.) 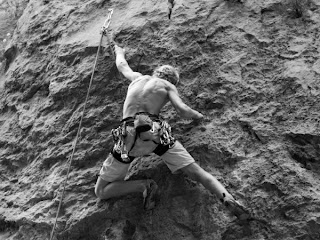 Often when climbing, we would come across an especially difficult section or sequence, and it was common to need multiple tries to complete the problem. Sometimes it would just simply be too frightening, and you'd either burn yourself out by hesitating too long before the attempt, or you'd simply come down and give up.

It didn't take us long to institute this rule: If you're going to come off (fall), come off trying. Quite simply, it became unacceptable to come off the rock without giving your absolute full effort.

Because of this mindset, it is of great concern to me when I see students who quit music without giving themselves a legitimate chance to succeed. I talked about this a little bit in an earlier post, but nothing makes me more grumpy than seeing a student pass up an opportunity to do something great either because they lack vision or are unwilling to exert themselves.

"It's too hard," and, "I can't do this," have stopped many a promising student from progressing, both in climbing and in music.

When we started to enforce the "come off trying" rule while climbing, some interesting things happened. I'll highlight only two.


One of my most successful drum students came to me as a forty-something mother of five. I can't remember the exact words, but she said something along the lines of, "My kids have all had their chance to learn music, now it's my turn."

She was never afraid of or intimidated by anything I asked her to do, and never got embarrassed if she didn't understand at first or couldn't do something right away. She just gave it everything she had, and kept trying until she got it. She embodied - and still does - the "come off trying" mentality.

That was over ten years ago, and today she is still playing in a successful local band with some other amazing women. They rock!

I understand that music and drumming - like rock climbing - may not be for everyone. But I also believe that you can't know that without trying. And I mean really trying, working hard and giving your best effort before you decide to go another direction. And for the vast majority of us, work and effort will result in success!

May you work hard, achieve success and always come off trying!