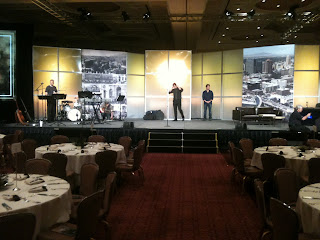 I've always wondered what it would be like to play in a house band for Letterman or Leno, and the other night I got a taste of it. One of the bands I play with, Lokalgrown, was hired to sit in as the house band for a talk show themed gala for the Salt Lake Chamber's 125th Anniversary celebration.

As the drummer, I literally became a cast member. I was asked to "kick" jokes and generally respond appropriately to the conversation and banter between the host (Curt Doussett) and his guests.

As a band, we were about as well-choreographed as you can get. Tunes were started and stopped on a dime, commercial "bumps" and "fades" were timed exactly, and every song clip was specifically chosen for its mood, tempo, tonality and overall effect. 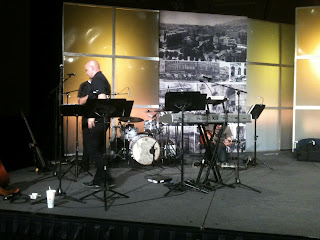 It was a lot of work, but it was very rewarding. I say this to my students all the time, but the harder you work for it, the better it feels when you perform it well.

And for all you drummers playing live TV, you have my respect.