Just a warning. I know I've written some pretty whack stuff before, but this might be the most whacked out yet. So, read with a grain of salt handy. 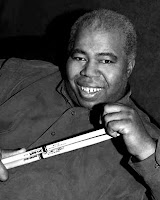 Several years ago I attended a workshop by Wally "Gator" Watson. There's much more to it than this, but he talked about how all of our instruments - especially drums - were once living things. Since he's a drummer, he talked especially about drums being made from trees.

Wally believed strongly that all living things have spirits, trees included. And since they were once living, they retain the ability to "house" a spirit. Specifically, yours when you play. Wally talked about playing with your whole heart and soul, putting your spirit into the drums when you play them. He called his drums, "Spirit Houses."


Beyond the instrument, too, Wally talked a lot about putting your soul into your music. As an example, he brought a teenage girl up in front of the group and asked her to do a little singing. He quieted the audience while he spoke to the girl, and she sheepishly began to sing, "Happy Birthday" to the audience.

Honestly, it was pretty embarrassing for all of us. She turned red, giggled her way through it, and looked around awkwardly the entire time. The audience didn't do much better. It couldn't get over fast enough! Wally smiled kindly, quieted the audience again, and whispered something quickly in the girl's ear.

She closed her eyes and began to sing the same song again, but in a completely different way. As the first notes poured out, the entire room changed. The air itself seemed to be made of a heavier substance. The once giggling teenager stood calmly, eyes closed, beautiful voice clear and true. As she got to the third line of the tune (sing along, everybody), she choked slightly as she sang, "Happy birthday, dear Mom, happy birthday to you." It was breathtakingly beautiful, and I was completely stunned.

The young woman finished the song and opened her eyes, and the audience applauded, almost in awe. As she stood there, Wally asked her to repeat what he had asked her to do. The first time, she said, he just asked her to, "Sing 'Happy Birthday.'" The second time? "He told me to sing it to somebody that I love, so I sang to my mom. She died of cancer a few years ago."

I don't exactly know how to put into words just how much that experience changed me, but it did change me. Since then, no matter what I play, be it complex and crazy or simple backbeats, I try to play it with every ounce of my soul. I try to fill my drums with as much of my soul as I can.

Not gonna lie. It takes a great deal of effort to play like that, but it's immensely rewarding. It's that whole, "What can I give to my music, the other musicians and the audience?" mentality, and I've come to love it, depend on it, and expect it of myself. 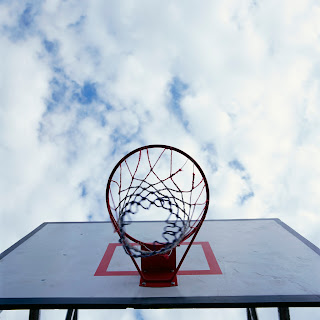 And if that's not weird enough for you, I've got one more. One night after a particularly amazing and enjoyable gig, I started doing something I've made a habit of - I put my hand on one of my drums and just said, "Thank you." I know it sounds really crazy, but I thank my instruments for allowing me to make music with them. It's humbling, and it reminds me that playing is a privilege, a team effort, and that I should never take it for granted.

Weirder yet? About a week ago, walking out of the gym, I looked up at the basketball hoop and softly said, "Thank you," and hoped nobody heard me. Because without the hoop, you can't, you know, uh.......never mind.