'That Thing You Do' may have had it right 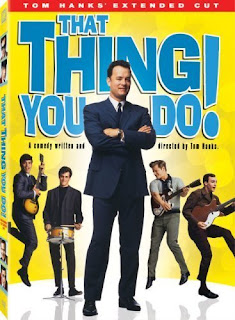 I graduated from high school the same year that the movie, "That Thing You Do," hit the silver screen.

*SPOILER ALERT* (Really?! Is there anyone over the age of twenty who hasn't seen this film?)

When it came out, I was working in a movie theater, so I saw it about six times. Initially, I loved the film because the drummer gets the girl, and that gave me a little glimmer of hope. But as I've progressed through my music career, one scene has come to have more and more meaning.

The scene occurs near the end of the film, when Guy (the main character and drummer in the band) meets one of his music heroes, an old jazz pianist by the name of Del Paxton. Guy has just told Del about his band, and the following conversation ensues (I've taken out some of the dialogue, but you'll get the gist.)


Del: Ain't no way to keep a band together. Bands come and go. But you got to keep on playin' - no matter with who. You guys any good?

Guy: Yeah, man. We got something snappy. Really think we do.

Del: I'm sure you do. But sooner or later, something makes you crazy. Money, women, the road - hell, man, just time.

Guy: Well, we've only been together for four months.

Del: Some bands I've been with, that's four months too long. You keep on playin'...and watch your money. You'll land on your feet.

Having played in a half dozen or so bands over the past twenty years, I've come to appreciate this approach more and more. I've been fortunate to play with both talented and genuinely good human beings for the most part, but it's true what ol' Del says: sooner or later, something makes you crazy.

In my experience, all of the causes Del lists have caused the breakup of bands, or at least the replacement of members. Time is probably the most common culprit as it eventually exposes everyone's true character, intentions, habits, etc., but money is a close second.

A close friend of mine, an unbelievably good musician, once played in a band that broke up two weeks before a very high-paying battle of bands because they couldn't agree on what they'd do with the money if they won. Yep. They broke up over money they didn't even have.

Beyond that, though, I've found that things are usually pretty good in a band until you start making some real money. There will be fights over who's doing more work, writing more of the material, booking the gigs and who has to spend the most on gear (drummers, of course). And if you get picked up by a record label, you have to deal with who gets the royalties, how the funds are split, who the manager is going to be, and much, much more.

There's a book that can help shed some light on it that I highly recommend. It's a little outdated at this point, but will give you a very clear, very accurate vision of how convoluted things can get in the music industry.

Check out the book here.

I'd also recommend that you read some of the books about the band U2, and learn a thing or two. In my opinion, they did it right. Why do I think that? Because they're in their FIFTH DECADE (YES - FORTY-EIGHT YEARS) of productivity and worldwide relevance. Compare this to the average one-hit wonder, and you have to think they found a magic formula of some kind, and part of that is an absolute commitment to share all the money equally for everything - gigs, sales, royalties, merchandise - everything.

Honestly, this topic (and all the related topics we should also cover) could take up a hundred years on a blog all by itself. But, for starters, let me offer just a couple of pieces of advice to get through the ups and downs of bands.

You got to keep playin'. Del Paxton nails this one, for sure. Always view yourself as an independent musician, even when you're committed to a band. Eventually the band will move on, and you'll still be a musician. Don't let the band's identity become your identity. Most importantly, you should always have some aims and goals that will last, and be prepared for the band to be gone. What would you do if they broke up today? Who and what would you be? What would keep you working on your music? I'm not saying you shouldn't be dedicated to the band, but be dedicated to yourself, too.

Watch your money. This will seem less important when you're not making any, but the instant the first dollar lands, you'll have a major problem if you don't have a major plan. How will the money be split, and do you all agree about it? Who will do the extra work involved in setting up and running the sound system? Will they get paid for it? How will you fund your band in terms of equipment, gas money, your individual instrument upkeep, etc? Does the drummer get more for cartage?

Try to think about every possible problem or contention, and agree on how it will be handled. When problems arise, talk about it openly and honestly as soon as possible, and don't stop talking until you all agree. And, as I've mentioned on another post, have a plan for saving some of your dough.

Give it everything you can, but not more than that. Keep your music - and especially bands - in their proper place in your life. There's definitely a time and place to focus on just one thing, but be careful about putting a job, relationship, school or other opportunities at risk. Especially with a band that's starting to go somewhere, it can be very tempting to put all of your eggs in that one basket. I always try to ask myself, "What if this thing blows up today? What will I do?"

Because - trust me on this one - anything in life can change in a heartbeat, and bands are especially prone to blowing up in an instant.

More on bands to come. And if you've had some experience, share it with us in the comments below.