You know how tall people always get asked if they play basketball? I have twin cousins who are 6’6”, and they do not play basketball, nor do they want to. They humor people all the time who ask the question, and privately want to slap them silly. 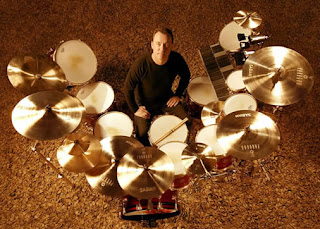 Well, it’s like that for drummers, too. The minute somebody finds out you play, they’re all, “So, hey, what about Neil Peart, huh? You must love Rush, right?” I’m the kid who deliberately avoided all things Rush and Peart for years. No, decades. Religiously, you might say.*

Up until a couple of years ago, I loved fantasizing about witty remarks I could reply with, but always said something like, “Oh, yeah, well you have to love him/them, right? Great stuff. Yeah, big fan.”

So, here’s the thing: I finally read an interview with Neil. After his first wife had died in 1998, he had spent an entire year riding a motorcycle around North America, and written a book about it - his fourth. The interview, and subsequent other articles I read, revealed Peart as a highly intelligent, well-rounded person, as well as being one of the most respected and emulated musicians of the modern era. I remember being impressed with him as a person, not as a musician.

Somehow, for me, that opened my ears - and my mind - to the music of Rush. Had I my life to do over, I would have taken that album the first time it was offered, not the 28 billionth. I can’t say that I’m a huge fan, not yet, anyway, but I have finally become an appreciateur, if you will, of Neil Peart and Rush. They take the creation of their music, and musical expression, very seriously. I respect them a great deal, and am coming to know more of their repertoire.

For those of you who have yet to get to know Neil Peart, allow me to suggest a starting point, although I’m probably the only one of his fans who would recommend it. Start with his instructional video, “A Work in Progress.” It’s pretty recent, so it’s thirty or so years into his career, and he talks about reinventing himself. Awesome. That I love.

*The way I also avoided the Beatles until about a year ago, I might add. I’m a fool’s fool, so to speak, because I’m now a dedicated student of the Beatles. Wish I had come to them sooner.
By keithpercussion - August 24, 2012